who named it for himself

City of Cape May

The Museum of Cape May County

Cape May was named a National Historic Landmark in 1976, the first city to achieve that status, for having “one of the largest collections of 19th-century frame buildings remaining in the United States,” more than 600 in all.  It’s a landmark because of the amazing concentration of Victorian houses throughout the historic core of the city, and because Cape May was the country’s first real beach resort.  In fact, the train from Philadelphia practically let people off on the beach.

Cape May has so many Victorian houses because almost the entire center of the town burned in 1878.  The city was rebuilt immediately in the most current style.  The historic preservation movement of the late 1960s and early 1970s saved most of these houses so that we can see them today.

While Cape May’s history is fascinating, that’s not the best reason to visit.  Cape May features spacious white sand beaches, surfing, fishing, wonderful restaurants, jazz, theater and band concerts, at least 4 miniature golf courses and special events all year round.  Birders also know Cape May as one of the best places to be during the spring and fall migrations.

Cape May is easy to find – just drive south on the Garden State Parkway until it ends, and then keep going south.  It’s about three hours from New York and two and a half hours from Philadelphia.  If you’re coming from Delaware, Maryland or the Washington, D.C. area, you may want to ride here on the Cape May-Lewes Ferry, which takes about 70 minutes to cross Delaware Bay. 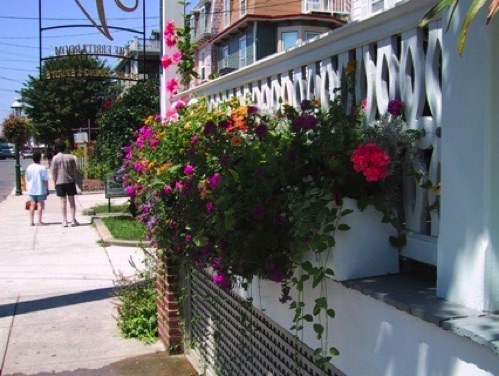